Whisky Advocate is the successor to the old Malt Advocate magazine, to which I’ve contributed a column since I was a teenager. (Well, not really, but sometimes it seems like that long…in a good way, of course.) The mag is now part of the Shanken Publications stable of journals, which also includes Wine Spectator and Cigar Aficionado,   and that means it is bigger, better and more beautifully laid out than ever. 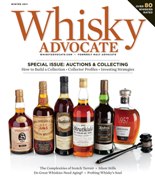 So what could possibly be better than an $18 gift subscription to such a magazine? How about two for the same price! Yes, that’s right, but one and get the second free, so the lucky recipients will have no idea you spent a mere $9 on each of them.

It’s a bargain rate for a fine publication. What’s not to like?