As I type these words, the snow is flying outside my downtown Toronto office window, incredibly the first legitimate storm of the winter for us. But I’m reminded of another Winter Storm, capitalization intended, a warmer, rainier and altogether more delicious one. 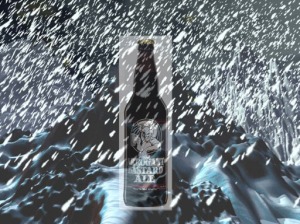 (Storm not exactly as illustrated)

It took place in Escondido, about a half-hour drive north of San Diego, at the Stone Brewing Company’s World Bistro & Gardens, and much like what is occurring presently in Toronto, takes place but once a year. It is, or rather was, the Stone Winter Storm, during which all 37 taps and casks at the World Bistro are turned over to present and former Stone beers, like 2005 Double Bastard Ale and Oaked Arrogant Bastard and the 7th, 8th, 9th, 12th and 13th Anniversary Ales. And if all that weren’t enough, they also roll out a bottle list of particular note, which this included beers as old as the 2004 editions of both Old Guardian Barley Wine and Double Bastard.

Did I have fun? Hell yes I did!

I could offer copious tasting notes on what I tried that day, like the herbaceously perfumey, cardamom-accented 07.07.07 Vertical Epic Ale or the 2008 Old Guardian, aged in red wine barrels for a fuller, rounder and fruitier character, but that would seem to be gloating, wouldn’t it? (Oh, I just did what I said I wouldn’t? Sorry about that.) Better to offer the following advice for next year:

Watch the website and plan for the 2011 Winter Storm. You won’t be sorry.